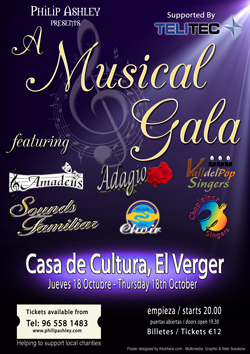 Held in El Verger on Thursday 18th October raised €1000 for Jalon Valley HELP. The concert was a mix of six different singing groups entertaining the audience with their own individual styles of music.

During the second half of the concert the raffle was drawn. The prizes were all donated by sixteen local restaurants and was very popular with the lucky winners going home with meal vouchers to enjoy at their leisure.

The concert itself was kicked off by the Cabaret Trio Amadeus who also doubled up as compere's for the evening. Instead of making the usual announcements about cameras and mobile phones being switched off, they decided to do it with a song. Amadeus broke up the evening with humourous songs and announcements between each of the acts.

Each of the groups demonstrated their own individual styles and it's very difficult to pick out the best parts because there were so many. Many of the songs sung by the choirs and groups were arrangements by their musical director Philip Ashley, who also conceived and produced the Musical Gala evening.

The first group to sing was the U3A Choir from Oliva, who decided to add a humourous twist to their set with the ladies donning nun's headgear to sing a number from the film Sister Act.

The Vall del Pop Singers got the whole audience singing along with them as they performed Downtown and I'm A Believer, and Cantãmus capped off their section of the Gala with a rousing version of The World In Union.

The six members of Adagio showed off their close-harmony singing with four numbers, finishing with a new arrangement of The Impossible Dream.

Sounds Familiar, who performed excerpts from their upcoming 10th Anniversary show "Showstoppers", surprised the audience with their high-energy rendition of the Joseph Megamix from Joseph and The Amazing Technicolour Dreamcoat among other songs.