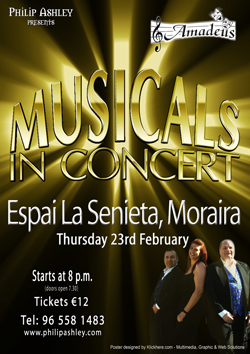 Amadeus are giving a performance of their latest revue show "Musicals in Concert" at Espai La Senieta in Moraira on Thursday 23rd February.

Philip, Amanda and Chris will take you on a whirlwind tour of songs from West End and Broadway musical shows along with their own brand of fun and humour. The show features many well-known songs from Broadway and the West End including Les Miserable, Evita, West Side Story and even Spamalot to name just a few.