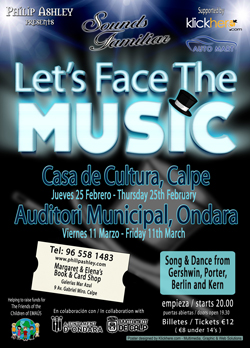 "Sounds Familiar pulled out all the stops on Thursday night when they performed their show "Let's Face The Music" in Calpe. The entire evening was a showcase of the music from the era of White Tie, Top Hat and Tails.

In keeping with their previous productions, the cast first appeared in their traditional outfits, but it only took two or three numbers before the coloured scarves and ties were thrown away in favour of long dresses and tailcoats. The mostly black and white set painted in art deco designs completed the effect of a bygone era of style and sophistication.

That does not mean that Sounds Familiar have lost their sense of humour. Gordon Atkinson was hilarious in his bizarre rendition of Gypsy and terrified poor Sue Williams who was left alone to deal with him. Three of the men tried their best to convince one of the other ladies to marry them in Tom Dick and Harry from Kiss Me Kate and Pat Doidge and Rosemary Brown lamented their travel problems of getting up the avenue in A Couple Swells from Easter Parade.

The harmony singing, that the group prides themselves on, was excellent and the whole evening was rounded off with a light-hearted and fun version of I Got Rhythm with half the cast playing percussion intruments.

A bucket collection was also taken on the night raising €125 euros for the Friends of The Children of Emaús, and 50% of the profits from the ticket sales will also be going to the association."