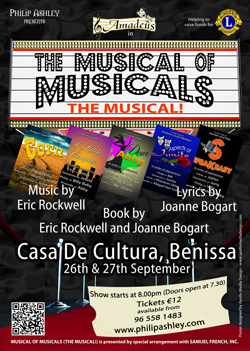 Philip was proud to present the Spanish Premier of this Broadway spoof, described as "Clever, Hilarious, Classy, Intelligent!", it centres around the story of the girl June, who is unable to pay the rent to her landlord Jitter, and is aided and abetted by her boyfriend Billy and neighbour Abby. The story is told five times, with five different endings, in the style of five diffent composing teams. The first on-stage is "Corn" told in the style of Rodgers & Hammerstein who wrote Oklahoma, Carousel and Sound of Music amongst others. The second "A Little Complex" is in the style of Stephen Sondheim, and the first half is rounded off with "Dear Abby" which is a tribute to Jerry Herman who wrote La Cage Aux Folles and Hello Dolly.

The second half features "Aspects of Junita", which will delight all Andrew Lloyd-Webber fans, and finally "Speakeasy" in the style of Kander & Ebb of Chicago and Cabaret fame.